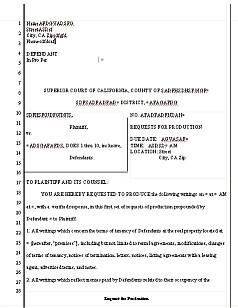 After we win your eviction case, or other action, you can make the landlord pay for trying to bully you like that, and costing you so much to defend. Often times, the landlord files a new case and another, trying to wear you down. What stops them and their lawyer from continuing and what gets you compensated for the financial and emotion trauma they caused is suing for Malicious Prosecution.

You can sue the lawyer, as well as the landlord, which may make that lawyer withdraw from any second case, leaving the landlord scrambling for a new lawyer who will know that we bare backing you, and therefore not be interested in taking the case. Seeing adverse consequences well into 6 figures and having to pay for his own lawyer, being an uninsured claim, the landlord has to think twice about whether picking on you was a good idea.

If the landlord finds a lawyer to defend him against your lawsuit, the first thing they always do is file a "SLAPP motion." SLAPP is the acronym for Strategic Litigation Against Public Policy. The idea is to protect free speech, but it has become their usual tactic when you sue the landlord and lawyer for malicious prosecution.

It can be risky, because the judge may not like tenants suing the landlords' lawyers, despite the law, resulting in an order dismissing the lawyer, awarding attorney fees against you, and requiring you to appeal that decision at even greater expense. This is why your Opposition to the SLAPP motion must be well done, to show as least the Appeals court that your claim against the lawyer is well founded. After all, it was the lawyer who told the landlord that they could get away with evicting you on phony grounds. He's/She's no bystander, but the cause of it all. They should have told your landlord that it was not a legal eviction, but they wanted to make the money, and probably usually get away with it.

If the SLAPP motion is filed, you have little choice but to Oppose it. That requires careful work to show how valid your claim is.