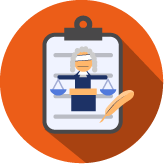 901- Petition for Writ of Mandate - Judge/Commissioner